The “new” moniker so beloved of Labour in the Tony Blair era has made a reappearance, this time at BbWorld 2015 in Washington DC. It came this time from Jay Bhatt, the latest President and CEO of Blackboard. We are now given “New Blackboard”:

Not content with that, he’s also giving us NLE – the “New Learning Experience”. (Wisely avoiding the XP option).
So what’s it all about? Well Jay Bhatt has identified five key areas:

Intriguingly, and almost as an afterthought in his keynote he stressed that integrated workflows might be the most important of these. Really? He talked passionately about the work that Blackboard have been doing, re-engineering their entire portfolio from the ground up (though that isn’t news, the same has been said in Vegas, and in Vegas before that).

There was also a strong attempt to show that Blackboard is putting the learner centre stage, with enormous pictures of children dwarfing the presenter on stage:

So what was new then? How will all this investment in technology help improve education? Jay is calling for a revolution, claiming that Education is in cris. Re-imagine Education everyone. So let’s see what he’s offering…

We were shown Blackboard Learn sporting the new Ultra interface. Again. Yes it is still pretty. Learn finally looks like it is using code that was written after 2010. But does it surface or bury the information learners need? I worry that it is offering content without context in the stream of new items and latest posts. Where has the scaffolding and advice from staff gone? If the underlying data model and database structure hasn’t changed, is it more than lipstick on a (very fat) pig? Time will tell. Oh and they will still host Moodle for you too.

Not exactly new. This HTML5 video experience has been showcased at the previous two BbWorlds and yet still hasn’t achieved feature parity with the old java version – no recording yet, no integration with Blackboard (ironic given the later claims of integration being the key).

Again, how is this new? This was basically a repeat of what was said the previous year. In fact this presentation seemed to cause more confusion than light, with many commentators on Twitter wondering just when the much vaunted “Ultra” interface (that is to premier in the SAS offering) will filter down to self-hosted clients, indeed if it will make it at all.

The app discussed last year is now available to some people. New?

You want it? Blackboard will provide it for you, at a keen price. Is this news?

Essentially joining things up, Blackboard have been threatening to do this for years. One day they might actually manage it, but anyone whose looked at the admin interface of the current Collaborate product will know that there is still some way to go on this. Too many of the products lack parity – no analytics data from Blackboard Mobile being an obvious example. This is an admirable aim. As it was in Las Vegas in 2013. That doesn’t make it news.

This was probably his strongest card. Providing integrated analytical data for all staff and students could help us to understand more about the way we learn. Sadly this is likely to be an optional extra, rather than a core offering available to all Blackboard clients.

He looked at the learner’s experience, stressing the life long nature of learning. Most relevant to me was the example of a higher education student:

We were then shown the workflows:

and guess what, Blackboard has solutions for all of these: 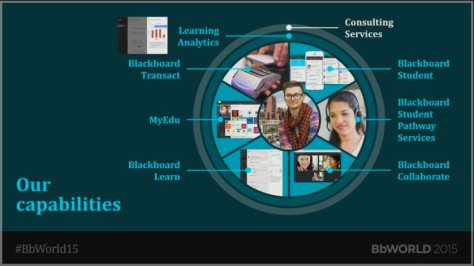 There were a lot of promises and repackaging of things already delivered. Perhaps my initial political analogy wasn’t so far off the mark after all. Come on Blackboard! There are a lot of bright, motivated people in the company, many of whom have spent time in education. You can do better and will need to do better if you are to deliver products that staff and students want to use and institutions are prepared to buy.