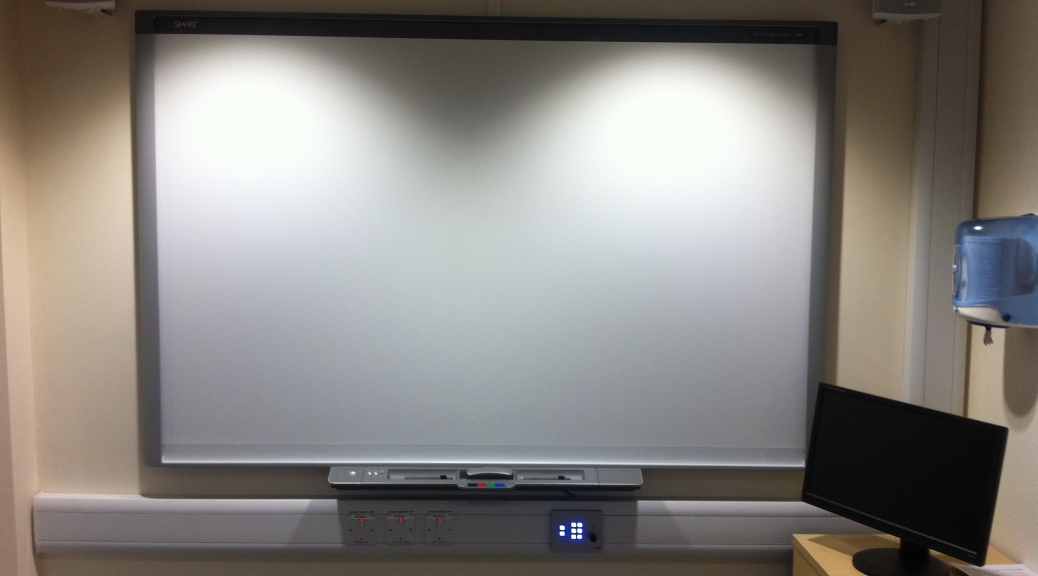 For the last ten years, electronic whiteboards – such as those produced by Promethean and SMART Technologies – have been standard items on any classroom refit and usually enthusiastically received by staff and students (see Smith, Higgins, et al. 2005). Every day when I drop my children off at primary school, they walk into rooms where the electronic whiteboard is up and running. Any parent who arrives late and has to take their child into the classroom is likely to see them all performing a 5 minute exercise routine following instructions on the board! For examples see this Pinterest site or the Activityworks website, the latter includes some explanations of why some people believe this approach is effective.

My observations of whiteboard use in schools is very different to that in universities, where the boards now usually sit switched off (in some cases hidden behind larger projection screens)!  Even in areas for group work – e.g. booths where students sit around a table with a laptop and an electronic whiteboard at one end – more often than not the whiteboard is unused.  The question is why?

This is a technology that showed a lot of early promise. A study by two staff at the University of Pittsburgh published in 2012 has caught the attention of SMART (in that they add a link of dubious legality to it on their website).  Jang and Schunn watched the way groups of engineering students interacted with/were constrained by the technology. The authors contrast what they term “individual tools” such as a computer or a person’s notes, with “shareable/collaborative tools” such as an electronic whiteboard or a physical prototype. Their results suggest that students who used collaborative tools from the start, and continued to use them throughout the project, were more likely to deliver. There’s a bit of circularity here, and I don’t feel you can unpick whether the availability of the boards increased communication, or if it just shows that people who were already experienced at group communication made good use of the available collaborative tools. SMART certainly hope you take the former view as you can see in this infographic they published summarising the findings. Opinion remains divided – e.g. this 2010 study by Torff & Tirotta suggests that some of the motivation-enhancing effects often associated with electronic whiteboards are overstated.

From my personal experience of using the boards, I have come across a couple of problems (ignoring the high cost of these devices):

Despite this list, I have seen people use them and use them well. By capturing a carefully designed “board-centric” activity, the focus of participants can shift from trying to record what is happening, to actually making things happen. That has to be a good thing. They also allow annotation of figures on the fly, which can help address any issues that were not anticipated when you prepared the materials.

Whilst I was initially attracted by the large number of page templates, I think there is a danger of over-preparing the session. Students need to be free to contribute to the session and take it in a direction that, whilst still meeting the learning outcomes, may not be exactly what you had planned. I find that if I have spent a lot of time preparing particular slides, I am more resistant to deviating. That is wrong.

I think the answer is probably to stop trying to write directly on the board. There have been a lot of advances in educational technology since the first electronic whiteboards were designed. The two key ones for me are the rapid growth and availability of wireless networks and tablets. Technologies such as Apple’s Airplay (sharing content from an iPad or Mac newer than mine via an AppleTV) are very slick and free you from the constraints of a single app/program (no matter how good it is). Connection is literally child’s play which should encourage staff and students to have a go. Rather than ask a student to come up to the board, or try and pass them a tethered tablet, surely it is better to get them to take control of the screen from their device. If someone wants to suggest a minor change, pass the tablet. That said, I think this model may be more suited to “serial collaboration” unless the app you are sharing support live collaboration (e.g. a wiki).

The cloud is also changing things –  if someone takes a picture with a phone or tablet (perhaps the result of a particular experiment, or something that illustrates a point they want to make), how easy is it to get it displayed on-screen? Do you need to swap devices, or is there some common repository (be it Flickr, Dropbox, OneDrive or iCloud) that you can use to facilitate instant sharing?

If we do decide to replace electronic whiteboards, it might mean we can finally get rid of switches like this one that are just asking someone to see what happens if you do!

Unless indicated otherwise, all content on Wrote-Learning by Dr Malcolm Murray is licensed under a Creative Commons Attribution 4.0 International License.